How does assessment work in an SBG-Classroom?

Students will acquire the necessary information in various forms from class and be assessed in a way that allows them to demonstrate what they know.

Freddie Freshman completes the in-class essay but scores a "2" on the 4-point scale.

There could be a whole slew of reasons why Freddie did not score better... such as:

a. Freddie might not have understood certain themes in the unit.
b. Freddie may have missed several days of class.
c. Freddie might have broken up with his girlfriend.
d. Freddie could have shifted from the custody of his father to his mother the weekend before the assessment.

Here's the beauty of the SBG-System… "why?" doesn't matter any more. We don't need to concern ourselves with excuses. For whatever reason, Freddie didn't master the material.

Even though we move on to the next topic in class, Freddie will still have an opportunity to
demonstrate that he understands the concepts taught in the strand.

Before we jump to the re-assessment part, let's examine how a multiple choice test is scored and turned into the "1", "2", "3", and "4" scores. (Click here for a breakdown of what each number represents.)  After students take such a test, their scores are calculated and placed on an "SBG Score Card". This is shown below: 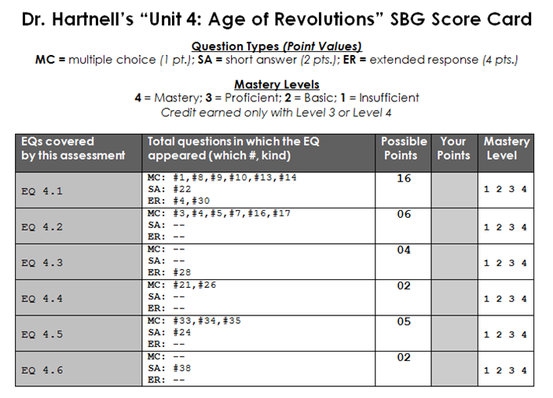 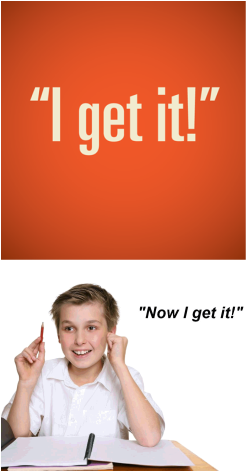 While the example above is just a partial "score card", it still shows how mastery levels are calculated. For instance, to get a "4" on EQ 4.1, a student would have to score no lower than 14 (or 87.5%) on the multiple choice, short answer, and extended response questions; a "3" would require a score no lower than 12 (or 75.0%); a "2" would result from scores of 10 or 11; while a "1" would result from scores of 9 and lower. So, let's say a student ends up getting a "2" for that particular EQ. It is recorded in Power School as such... but now the re-assessment procedure kicks in (which can be found by clicking here).

By using such a meticulous system of grading, I can guarantee an accurate reflection of a student's mastery level. (These sheets are not returned to the students directly since they can access their SBG scores on-line. However, they are always available for review should a student, guardian, or administrator make that request.)

Does this system help answer what's in a grade?

Freddie would have never mastered the material, and the groundwork for future failures would begin to take shape. Freddie would limp into his next school year without having grasped the necessary concepts to give him a fair chance of succeeding.

In an SBG-classroom, teachers can specifically identify which EQs Freddie understands and which EQs he does not.

Parents and guardians will be able to see exactly what their child did well and where they need improvement. This helps alleviate the guess-work that goes into interpreting letter grades.

"We move from 'Freddie scored well on the first three tests, but blew it on the last one, so his grade is a C,' to 'Freddie understands the powerful impact of the Byzantine Empire … but is struggling with how events in the last 200 years of the Middle Ages led to so many changes … during the Renaissance.' The first comment tells us nothing, but the second one provides plenty of information to which we can respond (Wormeli, 2006, p. 164)." 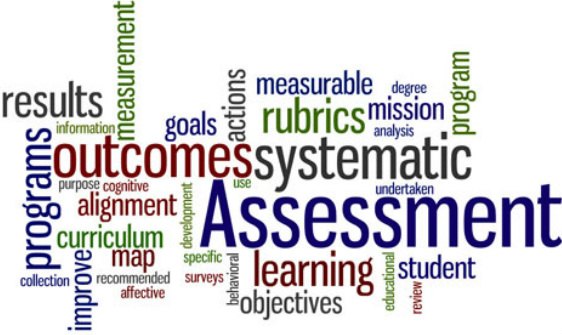 Click here to return to the SBG Q&A page